Eternal Phoenix Megaways Slot - Where and How to Play for Free

Eternal Phoenix Megaways is a stunning slot from Blueprint Gaming. The slot is based on the ancient Greek legend that tells of a bird rising from the ashes. This fantasy or mythical-themed slot has 6 reels in play, with an impressive 117,649 ways to win.

It's got a decent RTP of 95.5% too, and this comes alongside a whole host of different bonus features designed to keep the game flowing. Not only are there cascade wins, but the game also has a free spins feature and mystery transforming symbols for bigger wins.

You can even expect to land a max win of 50,000x your initial stake. This will really see you soaring as high as the phoenix itself. The slot is beautifully designed, with a range of symbols. Read our full Eternal Phoenix Megaways review and see if this is this a casino game for you.

Where to play Eternal Phoenix Megaways in India

Eternal Phoenix Megaways from Blueprint Gaming is a popular game at online casinos. This does mean that Indian players are able to find it at a number of reputable online casinos. Players should simply ensure the site has a licence before they start to play.

How to play Eternal Phoenix Megaways slot online in India

Eternal Phoenix Megaways has relatively straightforward gameplay making it easy for Indian players to get started on this game. To check out all the specifics, clicking on the information tab will take you to the full paytable. Here's a step-by-step guide on how to play.

Eternal Phoenix Megaways is a smooth adventure slot from Blueprint Gaming. It is based on the mythical bird that rises from the ashes and lives forever. This stunning slot is all about avoiding the lava coming off the mountains. So spin those reels and see how you do.

The game also comes with a decent RTP of 95.5% as well as a medium to high volatility level. The latter meaning you are likely to get big wins, but they won't hit all that frequently. It also means high risk with a longer period of play necessary.

This 6 reel slot also comes with a number of different bonus features that you can activate in order to help the game along. Finally, it's compatible with mobile devices, so you can play on the go, or from your desktop in the comfort of home.

Eternal Phoenix Megaways has one of the sharpest designs out there. The background is a stunning red landscape full of lava and volcanos. On the reels are a wide variety of different rocks and eggs, with the phoenix itself taking pride of place as a fiery symbol.

There is a range of different symbols with the lowest paying icons set as card values running from Ace down to 9. The higher paying symbols are various different coloured rocks and the phoenix. This last is the highest paying icon — 5 payout 50x your stake.

Players will need to keep an eye out for the other important symbols too, as these are attached to a number of different bonuses, which we will outline below. All of this excitement is accompanied by a thrilling soundtrack that helps to enhance the story.

Whenever we look at a slot, we check the RTP. This is the theoretical return rate when a player spins the reels over an extended period of time. Eternal Phoenix Megaways has a slot RTP of 95.5%. This is decent, but it is a little below the industry average.

Eternal Phoenix Megaways has a few different in-game bonus features that can be used to push the gameplay along. The slot doesn't have as many features as some other slots out there though. But, what it does offer really do help to increase the excitement.

Thanks to the Megaways feature, this slot has a whopping 117,649 ways to win. These are not all activated at the same time though. Rather, this is the maximum that can occur. Getting the top number of ways to win depends on the bonuses you have triggered. 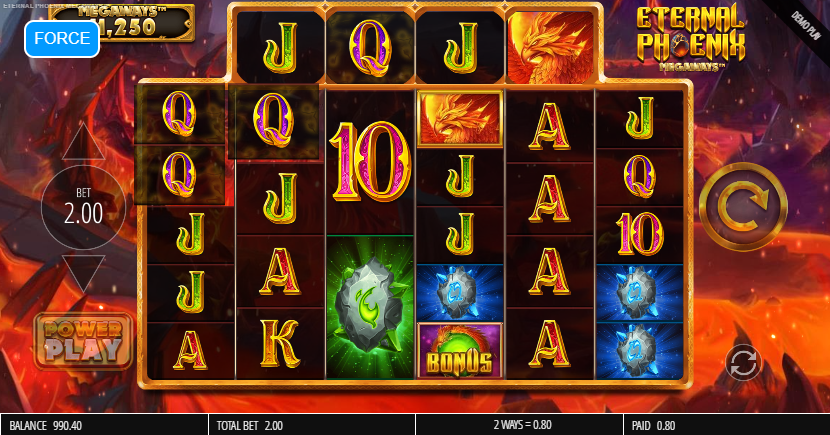 Eternal Phoenix Megaways is not a jackpot game as such. However, with the Megaways mechanic in play, you can expect to get a huge number of ways to win on any one spin. This and the bonuses available means that there is a chance to score 50,000x your bet.

The green egg with the word 'bonus' is the scatter symbol. Landing at least three of these on the reels will award free spins.

The wild is represented by the word 'wild' on a flaming backdrop. This can substitute for other symbols to make winning combinations. 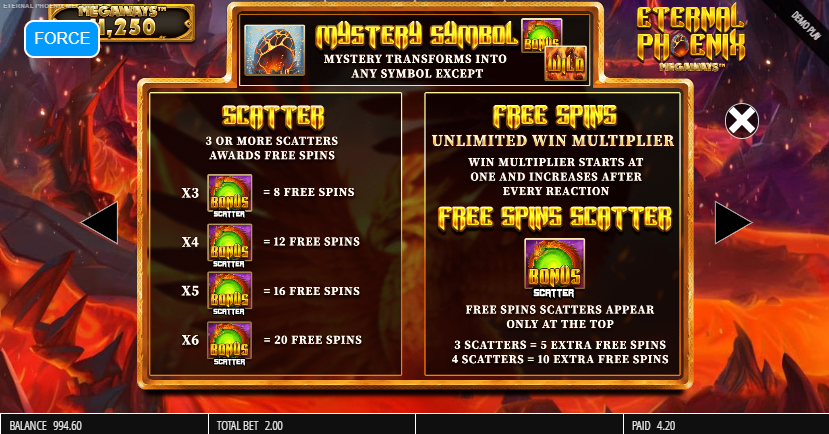 As well as the scatter, wild and bonus icons, there are a number of other symbols on the reels too. Each of these symbols has different payouts. The card value icons will pay out the lowest. The rocks and the phoenix are the higher paying ones.

The main bonus feature available here is the Free Spins feature. This is triggered when four scatters land on the reels awarding 12 free spins. You can get additional free spins when landing more scatters. Free spins also come with an increasing multiplier starting at 1x, with no upper limit.

In addition to the free spins, there is the Phoenix Egg Mystery symbol. When this lands, all mystery symbols turn into the same matching icon on the reels. This then creates a new payout value as these symbols can turn into high-value ones. It will also result in a cascade.

Finally, if you increase your bet per spin you can trigger the Power Play feature. This automatically starts with the minimum number of paylines. Click on the Power Play button on the left to start this option and reach up to 20,000 megaways instantly on the reels.

Yes, the Eternal Phoenix Megaways slot is legal in India. The game was created by Blueprint Gaming, which is regularly audited by third parties to ensure gaming fairness is had by all. It's also licensed to ensure it is fully tested before being played in casinos around the world.

However, it is still important for Indian players to make sure they are playing at a reputable casino site. This means checking the licencing of the casino and ensuring that it accepts Indian players to the site. It's even better if the site accepts INR to avoid conversion fees.

Eternal Phoenix Megaways online slot is a relatively straightforward game to get to grips with. The slot has some really strong bonuses available, particularly when it comes to the transforming symbols and the free spins options available. But it's the unlimited multiplier that really stands out.

In addition to that, there's the chance to score an impressive 50,000x your initial bet. This does make up for the fact that there aren't really that many bonuses offered here. That being said, this is a very pretty slot that maintains a high level of entertainment for all players.