Money Train 2 is an online video slot from the stables of Relax Gaming. It comes with several incredible features and offers decent payouts. It is playable on desktop and mobile devices and is a sequel to the original Money Train slot released in 2019. This article will provide a comprehensive review of the video slot and discuss its features. Keep reading to find out more.

Where to play Money Train 2 in India

Below you will find the best online casinos in India to play the Money Train 2 slot machine:

How to Play Money Train 2 slot online in India

The gameplay of Money Train 2 is quite straightforward. It is very entertaining and highly rewarding, so you can enjoy a great experience playing it. To get started, you need to choose an online casino that offers the game. You can choose one from those listed above as they offer the best services to players. After creating an account with the betting site, you have to fund the account using one of the payment methods supported. You can claim a welcome bonus at our recommended casinos when you make your first deposit. Once your deposit reflects in your betting account, head over to the casino's lobby and load the game. You will then be able to bet on it by indicating your wager amount based on the betting limit of the slot. After that, click on the "Spin" button to spin the reels of the game. Here is a step guide to playing Money Train 2 slot.

Relax Gaming has designed Money Train 2 to share similar features with its prequel title. It comes with 5 reels and 4 rows, with several symbols populating the reels. Betting starts at 0.10 up to 20 credits per spin. As for the maximum payout, it pays up to 50,000x the initial wager. This is high compared to some other slot titles, making it even more worthwhile for players to play. The game is a high volatility one that has a respins feature as well as other bonus features. To win, you will need to land three or more matching symbols on one of the paylines.

Visually, Money Train 2 has a great design and feel. The backdrop is a desert with the reels laid on a train. It has an updated look compared to its sequel and more of a steampunk aesthetic. Apart from that, the developer has included visual and sound effects in the game, making it even more fun. You will see these effects come to life when you line up a winning sequence or trigger one of the bonus modes. Money Train 2 has a retro and futuristic theme with a great soundtrack to complement it.

The Return to Player (RTP) percentage of a game is an important thing that players consider before choosing it. This is why we also checked it as part of our review. Money Train 2 comes with a 96.4% RTP, which is considered average in the iGaming industry. This means that if the total amount placed on the game in its entire lifetime is ₹100, then the theoretical amount that all players can win will be ₹96.4.

Money Train 2 slot is a casino game with plenty of bonuses that players can trigger. When you play it at a regulated casino, you may get lucky and trigger the bonuses and even win more through them.

There are 40 paylines in the video slot, and they are fixed. With a fixed payline game, you have to bet on all the lines. Money Train 2 pays from left to right. You can check the information section of the game to see the payline configuration.

Although it does not have a progressive jackpot, Money Train 2 offers pretty high payouts. You can win as much as 50,000x your original wager, and this is more than the 20,000x offered by the prequel version. Each symbol also has a value they are worth when you land between 3 to 5 of them on a line. 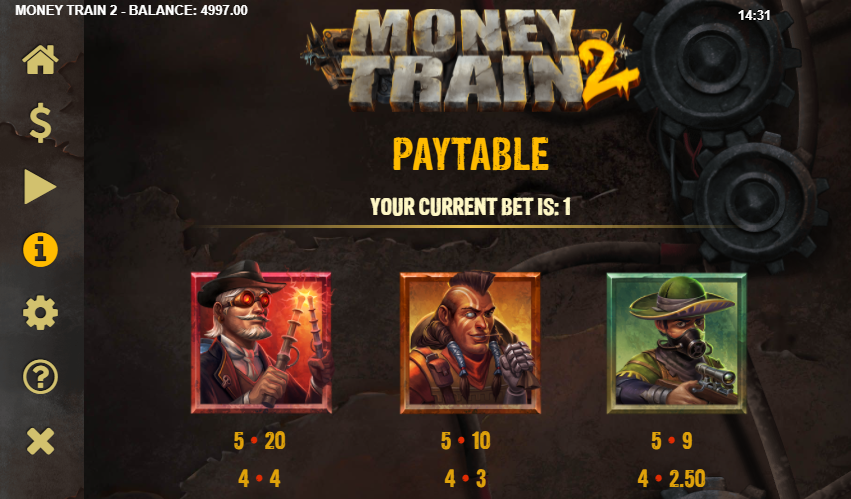 Money Train 2 slot has a wild symbol which is represented by the Skull icon. The symbol can substitute other symbols on the reels to help you form a payline win.

As with other slots, there are regular symbols that populate the reels of Money Train 2 besides the Wild and Bonus symbols. The low-paying symbols that the developer has opted for in the slot are shapes of card suits - diamonds, clubs, hearts, and spades. The high-paying symbols include the Collector, Sniper, Payer, and Necromance, with the latter offering as much as 20x when 5 of them appear on a line.

Money Train 2 has several bonus features. One such is the respin feature, which is triggered when two bonus symbols appear on the reels. Once the feature is activated, the bonus symbols will reveal multiplier values which are summed together. Any win that you make during the bonus round is multiplied by this value. Every non-winning spin will increase the multiplier by +1. 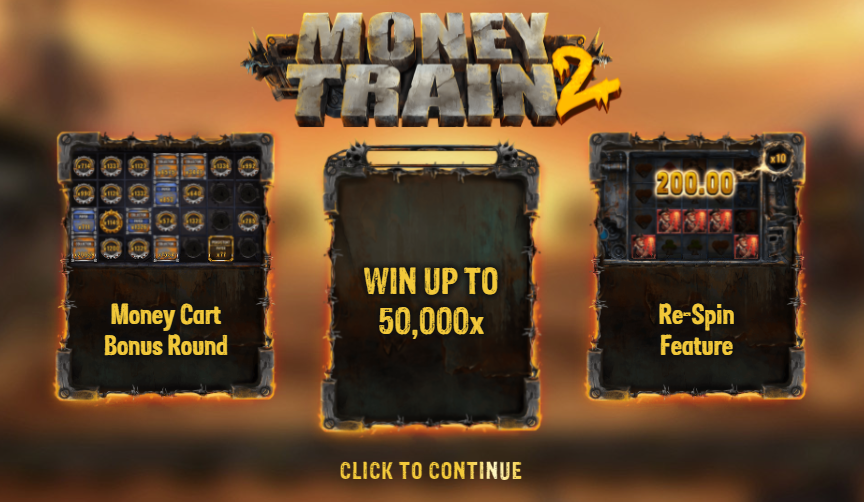 Another bonus feature available for Indian players to trigger while playing this video slot is the Money Cart bonus round. When you land 3 or more bonus symbols on the reel simultaneously, it will trigger this feature, and you will get 3 free spins. The Persistent Gold symbol can also substitute the bonus symbol to trigger the feature. Once the bonus is active, a new reel will be displayed, and only multiplier icons and high-paying symbols will appear on the reels. The three bonus icons that triggered the bonus feature will display their multiplier value and retain their positions.

During the Money Cart bonus round, persistent symbols can also be displayed, and each has its own function.

After the free spins are complete, all the multiplier values are summed together, and they will be multiplied with your current bet and paid out.

Money Train 2 is a video slot from Relax Gaming, a licensed provider in the iGaming industry. Thus, it is completely legal for Indian players to play the game. However, you must ensure that you only play at legal and licensed casinos such as the ones recommended above. As with other games from the developer, Money Train 2 has passed through series of testing phases before being released. This makes it safe to play, and you can rest assured that you have the same chances of winning as every other player.

Throughout this article, we have provided a detailed review of the Money Train 2 slot. The different features that the developer has included in it makes it much more fun to play than its prequel. We are pleased with the visually impressive graphics as well as the smooth gameplay of the game. In addition, the inclusion of the Money Cart bonus round and Respins feature shows that players will have plenty to enjoy when playing it. Not to forget the flexible betting limit and the whopping 50,000x maximum payout it offers.

Apart from that, the fact that it is playable on mobile devices means that Indian players will be able to play it on the go. Money Train 2 has an average RTP and is a high volatility game. Overall, we recommend the slot as a good choice that you should consider trying out.