Secrets of the Sorcerer is a nice addition to iSoftBet’s array of slot games. There is a very interesting blend of theme and visuals that has been used in this game where players get the chance to win up to a maximum of 6714x their stake.

Packed with three bonus features, the slot will keep Indian gamblers entertained as they spin the reels on this magical game. Secrets of the Sorcerer comes with cartoon-style icons set on the backdrop of an ancient castle. There is also an entertaining mediaeval techno soundtrack.

Secrets of the Sorcerer is a game where, in a classic mediaeval world, players meet a sorcerer who has solved the formula for how to achieve wealth. In this detailed review, we'll talk about everything you need to know about this slot before you start gambling with real money.

Secrets of the Sorcerer Slot Details

Where to play Secrets of the Sorcerer in India

iSoftBet is a top-notch software provider that regularly creates new high-quality video slots. Secrets of the Sorcerer is likely to be popular with Indian players who like to play fantasy-themed slots. You can play this game at any reputable, Indian casino site that hosts iSoftBet games.

How to play Secrets of the Sorcerer slot online in India

Powered by top game provider iSoftBet, Secrets of the Sorcerer comes with easy gameplay, so players will easily understand how the slot works. They can check out the slot help section for more information about the gameplay. Here are the main steps you need to follow while playing this slot:

Secrets of the Sorcerer Slot Review

Developed by iSoftBet, Secrets of the Sorcerer is a magical fantasy-themed video slot game that features five reels, three rows and 25 fixed paylines. The slot comes with three bonus features and offers the chance to collect a maximum potential win of 6,714x your initial bet.

Secrets of the Sorcerer is all about magic and casting spells. The designers have done just that with their choice to recapture some of the magic of early Nintendo-style games. But the very modern bonus features mean players in India will find plenty to enjoy as they spin.

This is a medium volatility slot, which means that players can expect to have a regular flow of small wins with the occasional larger prize. It has an RTP value of 95.96% and a 30.6% hit frequency rate on average. This game can be played on all smartphones and desktops.

Secrets of the Sorcerer slot comes with a superbly imagined design. There are colourful and bright visuals with a magic theme and an entire retro look with 8-bit graphics from the old days. The high-pitched, electro-style background music is perfectly suitable for the simple, blurry graphics.

Set against a castle background, the reels have A to J royal card symbols alongside dragons, quills and amulets. The highest-paying symbol is the wizard. Payouts of four, eight or 20 times your total stake are awarded for landing three, four or five wizards, respectively, on a payline.

Secrets of the Sorcerer is playable on all devices including mobiles, tablets and desktop computers. The easy gameplay and classic graphics are an ideal combination. Add to this the electro beat soundtrack. and it's easy to see why this slot game is popular among players in India.

Secrets of the Sorcerer Slot RTP

A good slot comes with a high RTP. Secrets of Sorcerer has an RTP value of 96.95%. What this means is that for every INR 100 wagered on this slot, players can theoretically expect to receive INR 96.95% back if they play over a sufficiently long period of time.

This slot comes with a potion bottle scatter. There is no wild symbol in the base game. However, excitingly, this slot has three in-game bonus features that include a Golden Wild. These features can be triggered by landing the correct combination of symbols. Keep reading to find out more.

Secrets of the Sorcerer Paylines

Secrets of the Sorcerer has 25 paylines that are fixed. This means that the coin size selected by the player is multiplied by 25 to give the total bet size. Landing anything from 3 to 5 symbols on one of these paylines will result in a win. 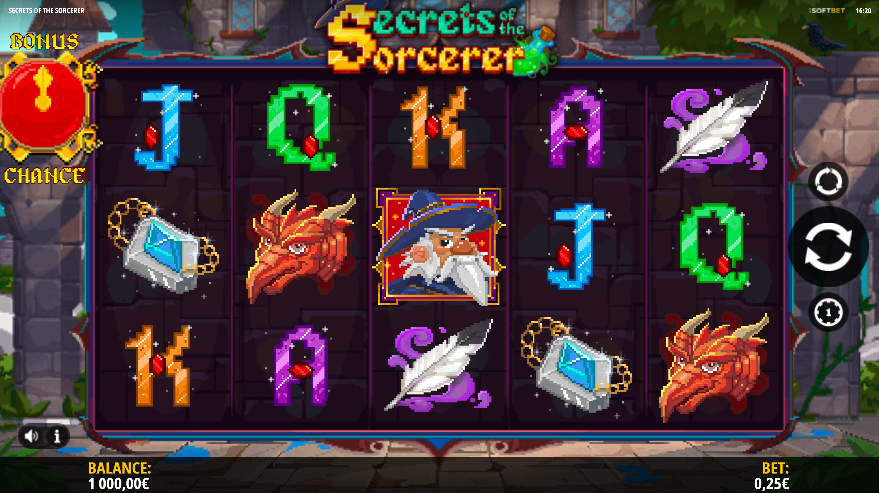 While Secrets of the Sorcerer does not offer the opportunity to win a jackpot as such, there is a pretty decent maximum win available. If you are lucky, players can trigger several of the in-game bonus features and win up to 6714x the total stake.

Landing the scatter, a potion bottle, on the second, third and fourth reels on the same spin triggers the Free Games feature.

There is no wild symbol in the base game. During the free spins feature, one symbol may turn gold and become wild.

Other than the scatter and wild, you will also find the usual A to J royal card icons which are the low-paying symbols. There are also some medium-paying symbols, including a feather, an amulet and a red dragon. The skilled sorcerer or wizard is the highest-paying symbol.

Base game features and bonus features

Secrets of the Sorcerer offers players three exciting bonus features. The Free Games Bonus Feature is activated by landing the potion bottle scatter on reels 2,3 and 4 during the same spin. Hitting the activated scatters, generates a brew that specifies the number of free spins awarded. 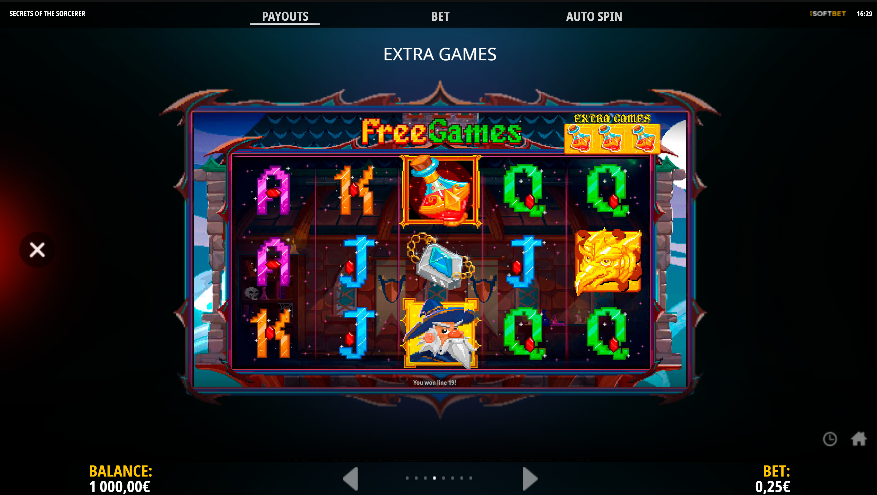 The Secrets Uncovered feature can be triggered at random during any base game spin. This feature guarantees that a player will receive one of two bonus outcomes. They will either activate the free spins feature, without having to land the scatters, or land a big win.

Is Secrets of the Sorcerer slot legal in India?

Secrets of the Sorcerer video slot is completely legal to play at most Indian online casinos. This slot's developer is iSoftBet, a game provider that has licenses from well-known regulatory bodies. Other than that, iSoftBet always ensures that its slots have been properly tested before they are launched.

When picking a gambling website at which to play the Secrets of the Sorcerer video slot, we suggest that you make sure that it is a legitimate online Indian casino. Check out our list of fully licensed sites. This way, you don't have to worry while gambling with real cash.

Indiagambler's thoughts on Secrets of the Sorcerer

In this article, we have covered the most important things you need to know about Secrets of the Sorcerer before you start gambling. The game offers impressive bonus features that Indian gamblers will find rewarding. We like the versatile betting range, which makes it suitable for all types of players.

The game is well suited for all laptops, desktops, tablets and smartphone devices, so Indian players can have fun from the comfort of home or on the go. Ready to take part in the wizard's secrets of magic? Visit one of the reputable Indian online casinos and start spinning.