Starburst Slot - Where and How to Play for Free

Starburst is an online slot from NetEnt that was released in 2012. It is one of the most popular slots played by players in India as well as in other parts of the world. The game has a simplistic design, yet it is fun to play.

Featuring 3 rows and 5 reels, Starburst comes with 10 fixed paylines that you can bet on. There is also a bonus feature available in the game that you can trigger randomly while playing it.

This article will provide you with a comprehensive review of the slot game and discuss its legality in India. Keep reading to know more.

Where to Play Starburst in India

Starburst is a popular slot that can be found in the lobby of many casinos worldwide. Below you will find the best online casinos in India to play the Starburst slot machine:

How to Play Starburst slot online in India

The gameplay of Starburst is easy and straightforward. To start playing, you need to place your bet by adjusting the bet level. Once you've selected your preferred wager amount, you can click on the "Spin" button in the bottom centre of the screen to send the reels into motion. You win when 3 or more similar symbols land on one of the lines. Below is a step-by-step guide to playing Starburst slot online. 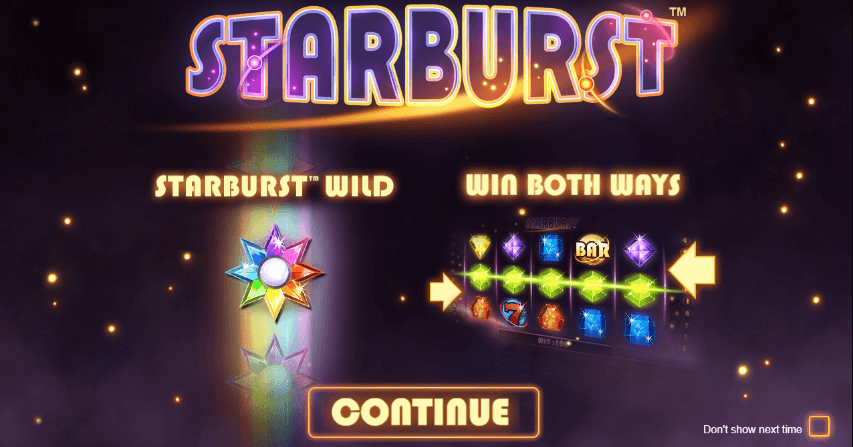 Starburst is one of the classic online slots that NetEnt casinos feature. The game has several unique features and is compatible with both desktop and mobile devices. As an Indian player, you will be impressed with its flexible betting limit of 0.1 credits up to 100 credits. It is a low volatility slot, which means that the risk associated with it is relatively low compared to some other titles. However, its maximum payout is not too impressive as players can only win 500x their initial wager.

In addition, Starburst comes with a bonus feature that you can trigger to enjoy a more exciting experience. You don't need to install any special applications such as Flashplayer on your device to play this online casino game.

NetEnt has been known to design visually appealing games, and the same goes for the Starburst slot machine. It is a colourful game with a gem theme that explains the different icons that populate the reels. Apart from that, it has visual and sound effects that come to life when you land a winning combination or trigger the bonus feature. The soundtrack that the developer used in the slot also complements the theme.

Overall, Starburst has a good design that will add to the adventurous feeling you will get playing it.

As part of our review, we checked the game's return to player (RTP) percentage. Starburst has a 96.09% RTP, which is a little above the standard 95%. Thus, players can theoretically expect to receive 96.09% of the entire bet placed on the video slot in its lifetime as winnings. However, you should bear in mind that this is purely theoretical and may not happen during your game. 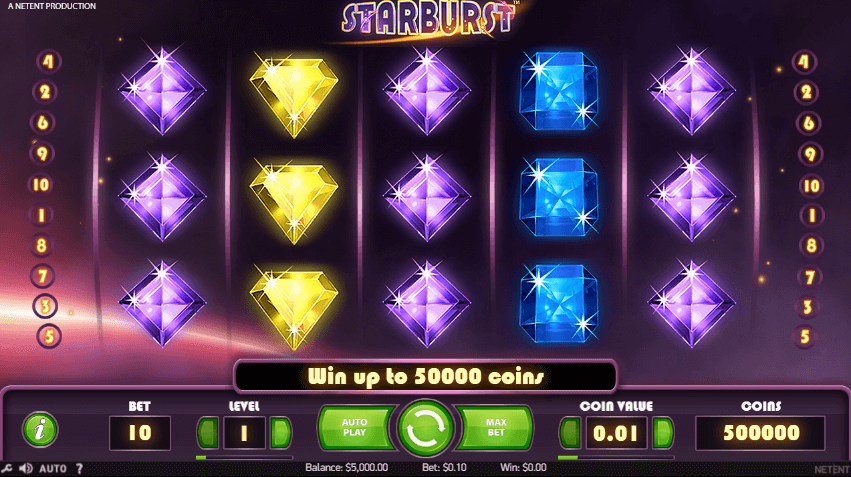 Impressively, Starburst has several special features, which explains why it is one the most popular online slots in the iGaming industry. There is also a bonus feature available in the game, and the developer has designed it to make the gameplay easier. Apart from that, it has an AutoPlay feature for spinning the reels automatically.

There are 10 paylines in the game, and they are fixed. This means that you have to bet on all the lines in each round. You can check the payline configuration in the information menu of the game by clicking the "i" button. The amount you can win is determined by the value of the symbol that you land on one of the lines. Starburst slot pays winnings from right to left and left to right.

Starburst is not a progressive jackpot game, so do not expect massive payouts here. The maximum payout it offers is 500x your original wager, but this is understandable since it is a low volatility game.

The game does not come with any scatter symbols. Thus, you cannot trigger bonus rounds associated with scatters.

Apart from the wild, other symbols appear on the reels of the Starburst slot. The low paying symbols are different coloured gemstones - purple, blue, orange, green and yellow. The high paying ones are the 7 icons and Bar icon. You can check the paytable of the game to know the value of each symbol.

The expanding Starburst wild is the only bonus feature available for players to trigger when playing the video slot. When the wild special symbol lands on the middle reels 2, 3 or 4, it will expand to cover the entire reel and remain in place while you get a re-spin. If you can land another special wild icon during the re-spin round, you will get another re-spin up to 3. With the wilds in place, you can land decent wins in this bonus feature. 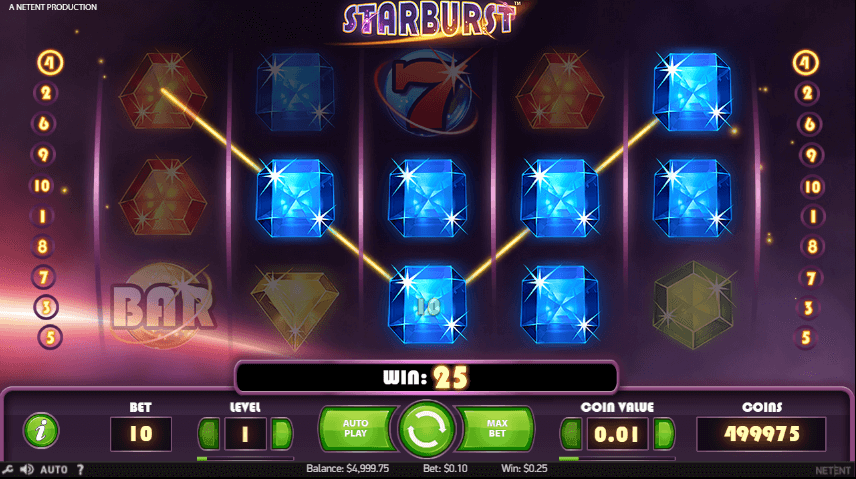 Is Starburst slot legal in India?

Starburst is a legal online slot in India. The game is developed by NetEnt, a provider that is licensed and regulated by several top regulatory bodies. Apart from that, it has been vetted and found safe to play before released into the iGaming market. When you play Starburst for money at a top online casino in India, such as those recommended by Indiagambler, you can rest assured that it has not been tampered with. However, ensure that you play responsibly.

So far, we have provided a detailed review of Starburst in this article. The several impressive features that the developer has included in the game, coupled with the flexible betting limit, makes it a good choice for Indian players. We are impressed with the expanding Starburst wilds bonus feature of the game.

The game's responsiveness on desktop computers and mobile devices also means that Indian players can enjoy playing it on the go. Play Starburst for real money at our recommended online casinos, which offer an incredible welcome bonus and free spins!