The Goonies Return Slot - Where and How to Play for Free

The Goonies Return slot comes from the exciting studio, Blueprint Gaming. The slot is all about recreating that sense of adventure from the 80s movie. This slot offers up a 5 reel, 20 payline game replete with various extras to keep both the action, and the mischief, flowing.

What really makes this game stand out is the fact that there are a total of 13 different bonus features. And these can be activated on any single spin made. These features include free spins, a bonus feature, and a whole lot more, all propelling the action along.

The game is also fully mobile compatible meaning you can play it on any device whether you're at home or out on the way to work. Throughout this article, we will cover all the main features of this slot so that Indian players know exactly what to expect.

Where to play The Goonies Return in India

Blueprint Gaming has a number of its slots at a wide range of different casinos in India. This means that Indian players will easily be able to find this slot to play. However, it is important that players make sure they are playing at a licensed site.

How to play The Goonies Return slot online in India

The Goonies Return from Blueprint Gaming has straightforward gameplay. This makes it very easy for Indian players to understand how to play. All you need to do is click the help icon to see the payouts listed in the paytable. Here is a step-by-step guide on how to get playing.

The Goonies Return is a really fun, adventurous slot from Blueprint Gaming. If you're ready to head on a little mystery adventure with the intrepid gang of kids, then this is the game for you. So, get ready and join in the fun from anywhere.

This game is all about hunting for some lost treasure but, as these are kids, things can and do go wrong. You need to grab hold of that map and see if you can track down the treasure before the adults stop your fun plan.

It's got an RTP of 96% too with a whopping 13 different bonus features to go with it. These features include all sorts of things like free spins, multipliers, symbol upgrades and even expanding reels. All of this makes this slot an adventure in itself.

Based on the cult classic film from the 80s, The Goonies, this slot relies heavily on characters and imagery from that movie. The slot, however, makes things a little more comic book, which really suits the style and feel of the slot game from the start.

Each of the characters on the reels is instantly recognisable too. On top of that, there are even snippets of dialogue from the film to help immerse you in this exciting world. Finally, there's a cute soundtrack to go along with it all which builds the atmosphere.

The top-paying symbols in this game are the four children. However, for the really big payouts, you need to be looking for the pirate flag. The lower-value icons are represented by Ace to Jack. Keep an eye out for the medallion as that's the wild symbol.

The RTP or return to player rate of The Goonies Return is a solid 96%. This means that you can expect to get 96 back on every 100 you spend. This is a decent RTP sitting at just industry standard, though a higher RTP would be better.

The Goonies Return online slot has an impressive 13 different bonus features running throughout the game. These features can help you get more winning chances as you play. By offering these various in-game features, the excitement is raised to an even greater level for players.

The Goonies Return is a bit more of a simple slot when compared to some others out there. The slot only has 20 paylines, but this is plenty for most players and will still offer a number of good wins. These paylines are fixed, so you can't change them. 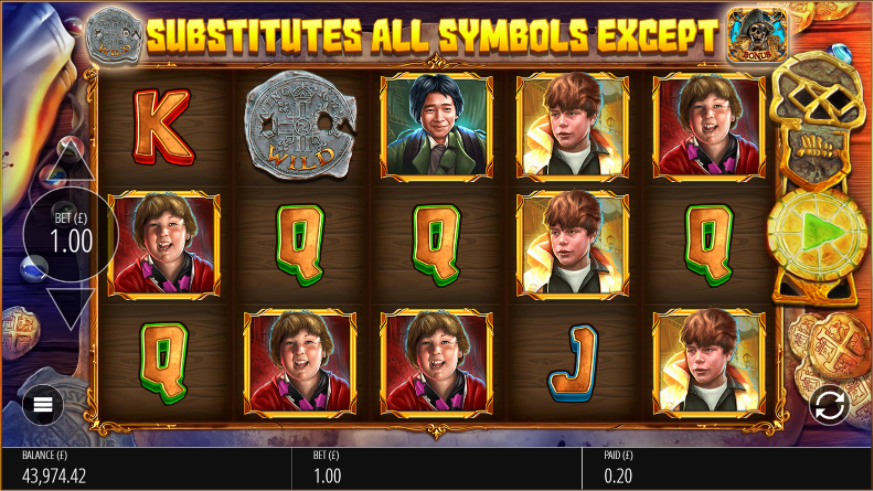 There is no specific jackpot attached to this game. However, through the various different in-game bonus features, it is possible to get a whopping 50,000x your initial bet. Generally, though, the likelihood is a top prize of 500x on each spin, which is a little disappointing.

The wild is represented by the Medallion. This symbol substitutes for others to help you get big wins. Land 5 and it offers 25x. 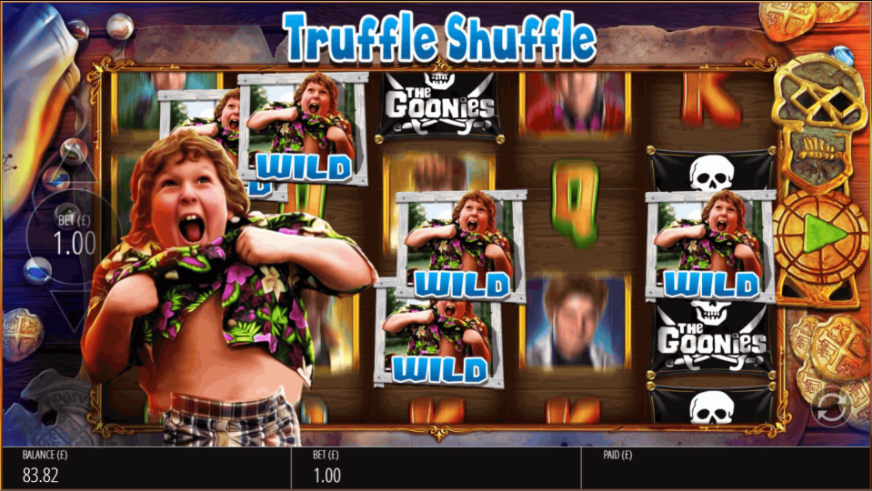 Excitingly in this game, there are a ton of bonuses available. To start with there are seven modifier features that players can trigger on any spin. These include a Truffle Shuffle Wild feature for extra wilds, Hidden Riches offering a Mikey wild to each reel and more.

This feature is activated, like all the others, when the bonus wheel is triggered by landing three One-Eyed Willy symbols. This feature needs you to turn the key, which reveals a cash reward. You can collect this at the end of the round or trigger another bonus feature.

To get this feature you need to collect doubloons as you move along the trail. Doing so increases the value of the multiplier. As you go, you can score upgrades which will then boost the value of the end prizes too. Finishing the trail takes you to the Big Money Bonus.

Is The Goonies Return slot legal in India?

Yes, The Goonies Return is legal in India. This is because Blueprint Gaming is the provider, and they are licensed and registered with a number of gaming jurisdictions. This studio also makes sure that they are regularly audited for gaming fairness so that all games run smoothly.

However, it is still important that you make sure you are playing at an online casino that is legal in India as well. There are a number of top Indian sites available here, so just check out some of our reviews and see which site you like.

Indiagambler's thoughts on The Goonies Return

The Goonies Return slot is an exciting slot game that has plenty of variety when it comes to the gameplay. With the whopping 13 different features, there's always something going on when you spin these reels, ensuring you're never going to get bored. It's an adventure every time you play!

The game has a top prize of 50,000x up for grabs too and, with the exciting characters as the main symbols, you're fully immersed into the game as well. If you enjoyed the cult film, then this is the slot for you as it really embraces the film's vibe.